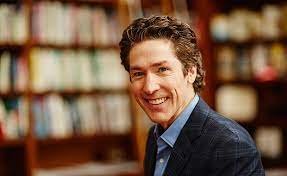 Joel Osteen, the speaker of sermons on the US television and many more countries in the World, is an American pastor, author, and televangelist. As per the data collected in 2018, his televised sermons had garnered about 10 million viewers in the United States alone with more than several million viewers in over 100 countries. He has also authored numerous books which have become best sellers.

The American pastor’s full name is Joel Scott Osteen. He was born in the year 1963, on the 5th of March, in the city of Houston, Texas, United States. His father’s name is John Osteen and his mother’s name is Dolores Pilgrim and he has five siblings. His father is the founder of Lakewood Church ( Joel Osteen is the current senior pastor of the church ) and a former Southern Baptist pastor.

Joel Osteen attended Humble High School which is a public high school situated in Humble, Texas, and graduated in 1981. He then went to Tulsa, Oklahoma, and enrolled in Oral Roberts University in order to study Radio and Television Communications but he didn’t finish to graduate and thus, didn’t receive a degree. He returned to Houston in 1982 and founded and produced Lakewood’s television program for televised sermons for 17 years when his father passed away from a heart attack.

In 2002, his three older siblings and a younger sister started getting involved in full-time ministry. While his half-brother did missionary work.

Joel Osteen got married to Victoria Osteen in 1987. Victoria later became a copastor of the Lakewood church. The couple reportedly has a son and a daughter together. The Osteen family lives in River Oaks happily. They live in an expensive mansion but Joel Osteen has stated that he does not draw any salary from the church and instead uses the income from the books that he sells.

Osteen’s father had always encouraged him to preach but would always decline the offer until early 1999 when he accepted the suggestion and preached his first sermon. His father passed away six days later and after two weeks Joel Osteen started preaching regularly. Later, in the same year, he was made the senior pastor of Lakewood Church.

Due to the increasing popularity of the church, the number of people attending the church every day also increased. As a result, in 2003, the church acquired the Compaq Center and renovated the entire property. According to the data available, the renovations took more than fifteen months to complete and cost over $105 million. The new building was designed to add five stories and have more capacity to hold the ever-increasing attendance. The Compaq Center was the former home of the AHL Houston Aeros and the NBA Housten Rockets.

In 2005, the new church was finally opened to the public and the grand opening was attended by Rick Perry, the Texas Governor, and Nancy Pelosi, the then-House Minority Leader and the current Speaker of the House. The grand opening was attended by 56,000 other guests. In 2008, according to Osteen, Lakewood church’s TV program had garnered viewers in over 100 countries with 7 million viewers per week. By 2014, the Lakewood church’s attendance had increased from 5000 to a staggering 43,000.

In 2006, Osteen was included in Barbara Walter’s list of the 10 Most Fascinating People. In 2010, Osteen along with his family was invited to the Easter breakfast at the White House by then-President Barack Obama.

Pastor Joel Osteen released his first book in 2004 titled Your Best Life Now: 7 Steps to Living at Your Full Potential. This book reached the position of number 1 on The New York Times Best Seller List.

He released his second book in the year 2007 titled Become a Better You: 7 Keys to Improving Your Life Every Day. His second book also topped the New York Times Best Seller List.