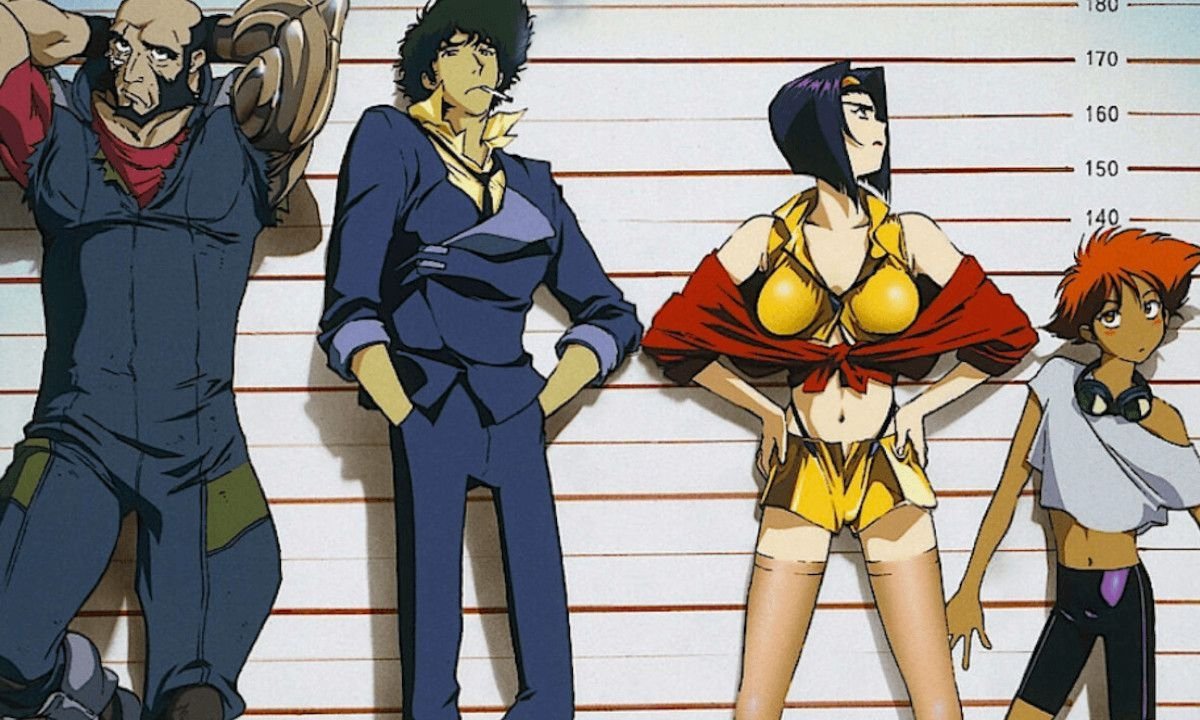 How to Watch the Cowboy Bebop Series in Order?

Cowboy Bepop is a neo-noir science fiction anime television series of Japanese origin. The show is created by Hajime Yatate and primarily directed by Shinichiro Watanabe. A few episodes of the anime series are also directed by Yoshiyuki Takei, Ikuro Sato, Kunihiro Mori, Hirokazu Yamada, and Tetsuya Watanabe. The Cowboy Bebop anime series is produced by Masahiko Minami, Kazuhiko Ikeguchi, Tsunetoshi Koike, Ryo Miyaki, Jerry Chu, Haruyo Kanesaku, Richard Kekahuna, Osamu Maseba, Yutaka Maseba, Charles McCarter and Miyuki Ogino. The script for the show is written by Keiko Nobumoto and the music and soundtrack for the show are composed by Yoko Kanno. The show is produced by Sunrise studios and broadcast on TXN ( TV Tokyo ) and Wowow network channel in Japan. Cowboy Bebop was initially broadcast on TV Tokyo Broadcast from 3 April 1998 till 26 June 1998. It was then aired on Wowow Broadcast from 24 October 1998 till 24 April 1999. In Australia, the licensing rights to the anime series are owned by Madman Entertainment. In North America, the series is licensed by Crunchyroll and in the United Kingdom, Cowboy Bebop is licensed by Anime Limited. In Australia, the show is broadcast onABC2, Sci Fi Channel 9Animax) and the Adult Swim network channel. In Canada, the show is broadcast on Razer (Kamikaze) channel. In the Philippines, the show is broadcast on GMA Network, TV5, Hero, and TeleAsia Filipino network channels. In South Asia and Southeast Asia, the series is broadcast on Animax. In Singapore, Cowboy Bebop airs on Arts Central. In the United Kingdom, it is broadcast on CNX, Anime Central, Showcase TV, and Viceland network channels. Lastly, in the United States of America ( USA ), the anime series airs on Adult Swim ( Toonami).

Cowboy Bebop is known as one of the greatest and most popular animated television series of all time and has been credited as a gateway show for other anime series in general. The series was a commercial and critical success in Japan as well as in other international countries, mainly in the United States of America. The show has received various major anime and sci-fi awards and nominations since its release and has received praise from critics for its characters, style, story, animation, soundtrack, and voice acting. The show was also dubbed in English, which is considered to be one of the best anime dubs. The show has also been credited with introducing and popularizing the anime genre among Western viewers and audiences in the early 2000s era.

READ MORE | JON B WIFE, CAREER, AND NET WORTH!

How to Watch Cowboy Bepop Series in Order

The Cowboy Bebop series can be viewed in the following order: Episodes 1 to 13 have to be viewed first. A special series titled Cowboy Bebop: Yose Atsume Blues (released in 1998) has to be viewed next. Due to the violence portrayed in the first 13 episodes of Cowboy Bepop, the show was canceled, and the Cowboy Bebop: Yose Atsume Blues special was renamed Cowboy Bebop: Session XX- Mish-Mash Blues, and released in 1998. This special is a compilation of short clips from the first thirteen episodes of the anime series. The next thing to watch is episodes 14 till 22 of the original anime series. The Cowboy Bebop anime series has also been adapted into a movie titled Cowboy Bebop: The Movie, which was released in the year 2001. The events of the movie are set between episodes 22 and 23 of the original anime series. The movie is set on planet Mars in the year 2071, almost 50 years after Earth was destroyed by a catastrophe. As a result, humanity has moved to other planets and moons to survive. The film focuses on the adventures of legal bounty hunters who travel together on a spaceship called the Bebop. One of these bounty hunters is Spike Spiegel, who is a former member of the Red Dragon crime syndicate. Another bounty hunter is Jet Black, who is the owner of the Bebop and a former police officer. Faye Valentine is a woman who was once on the run from bounty hunters. Edward Wong Hau Pepelu Tivrusky IV, also known as Ed, is an energetic and bubbly computer genius. Lastly, Ein is a type of artificial intelligence in the form of a dog and possesses human-like intelligence. After viewing the movie, episodes 23 to 26 of the original anime series have to be viewed. After episode 26, another special titled Cowboy Bebop: Ein no Natsuyasumi ( Ein’s Summer Vacation) was released in 2012. The special focus is on one of the members of the Bebop spaceship named Ein, the artificial intelligence “data dog”. Ein is a Corgi, who dreams of taking a break from the troubles that he gets into due to the antics of his colleagues. He dreams of going on vacation on a tropical island whilst sipping on a cocktail with Edward.

READ MORE | DAVINA POTRATZ NET WORTH: HOW MUCH DOES SHE EARN?

The events of the Cowboy Bebop anime series are set in the year 2071, around 50 years after a catastrophe destroyed planet Earth and made it uninhabitable. Due to this catastrophe, mankind has resorted to living on other planets and moons of the Solar System to survive. In the solar system, there is an increase in crime rate, so the Inter Solar System Police ( ISSP ), draw up a legal contract with a group of registered bounty hunters, also known as Cowboys. These bounty hunters are responsible for catching criminals and bringing them to the authorities in exchange for a monetary reward. These bounty hunters travel throughout the solar system in search of criminals aboard a spaceship called the Bebop. The bounty hunters include Spike Spiegel, Jet Black, Faye Valentine, Edward, and Ein. For the show, these Cowboys get themselves into trouble and dangerous mishaps, which often leaves them without any money. They also confront and overcome events from their past.

In Cowboy Bebop, Spike Spiegel is a muscular 27-year-old bounty hunter that was born on Mars. He was a former member of the Red Dragon Crime Syndicate and has a history of violent activity. He is also an experienced pilot. The character of Spike Spiegel is voiced by Koichi Yamadera. Jet Black is a 36-year-old former police officer from Ganymede, which is a Jovian satellite. Jet Black is a character opposite the character Spike. Jet was a former investigator with the Inter Solar System Police (ISSP) until he lost his arm in an investigation, wherein his partner betrayed him. the character of Jet Black is voiced by Unsho Ishizuka. Faye Valentine is a seemingly 23-year-old girl, who is 77 years old. She appears young after being put into a state of cryogenic freeze after a space shuttle accident. Faye is excellent in combat and is also extremely capable of handling guns. Initially, she does not trust her colleagues and lies to them constantly. But by the end of the series, she learns to value her colleagues. The character of Faye Valentine is voiced by Megumi Hayashibara. Edward Wong Hau Pepelu Tivrusky IV, also known as Ed, is a computer genius and hacker prodigy. She is a strange and extremely intelligent 13-year-old who is considered to be a free spirit. She often walks barefoot and sits and walks strangely. The character of Edward Wong is voiced by Aoi Tada. Ein is a Welsh Corgi dog, who was brought aboard the Bebop spaceship after a failed attempt to catch a criminal. Ein is said to possess human-like intelligence and can perform tasks, that a normal canine would not be able to achieve. The character of Ein is voiced by Koichi Yamadera.

In this article:cowboy bebop, netflix, where to watch