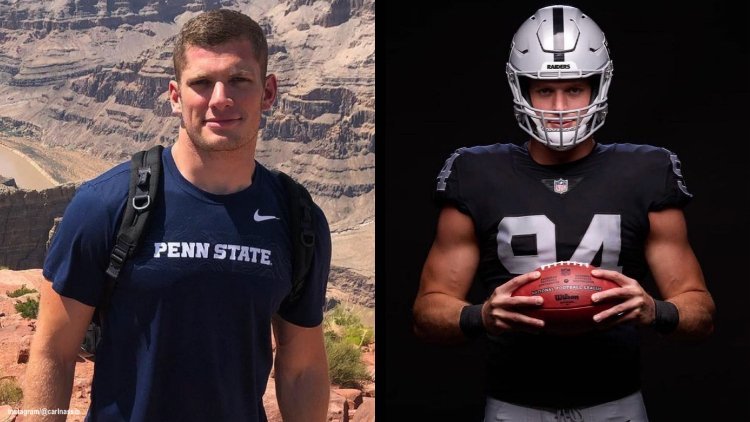 Who Is Carl Nassib’s Boyfriend?

And Goal! I am sure there are many of you who really enjoy watching football. And many of you might be a player as well, right? Gossips related to sports, news on matches and relationships and celebrity lives of all the players always intrigue the interest of the audience, especially the fans.

And those of you who know Carl Nassib you might be wondering if he is engaged in a relationship or not, right? Well, the American player declared his gay relationship with his plus one on the Internet. Yes, you heard it right, love is indeed in the air.

But who is this lucky guy and from when did they start to date?

I know you folks are excited to hear everything about their relationship and also know who his boyfriend is. Well, then I won’t keep you waiting and directly move on to answer your question.

Upon the announcement that he is dating someone many got heartbroken as one of the most handsome bachelors is not single anymore.

On how much heartbreak you get I know you will scroll down to know who he is dating right? I am kidding! Well, am I?

Hold on tight and play some carols, because here I am ready to share some exciting details on the two love birds!

Who Is Carl Nassib’s Boyfriend?

Carl Nassib, Las Vegas Raider is the first active player who came in front of the camera and declared his sexuality. The only NFL player who declared himself to be gay and confirmed that he is in a relationship.

When he was asked by Donny in a podcast he co-hosts, Carl said that he was happy to meet an awesome guy.

Then, the question is, who is this man who won his heart?

Although at first, he didn’t mention who he was dating. But the internet broke as netizens found pictures of Erik Gudzinas and Carl Nassib together. Later, Erik posted many cute pictures of the duo together in his own Instagram handle. Thus, confirming that they two are dating.

If you visit their Instagram, especially Erik’s you will find plenty of cute and adorable pictures of the love birds. Although Netzines went wild upon Carl’s declaration that he was no longer single. But they couldn’t help but swoon as the duo shared some love-dovey pictures.

Carl’s bae, Erik Gudzinas is a staff of an NGO. He works at a prevention service at the Delaware County Department of Human Services: Division of Drug and Alcohol.

MUST-READ | Is Mithali Raj Married? Is She Dating Anyone?

When Did Their Relationship Start?

The answer to this question lies unknown. But Carl Nassib confessed that he is really happy to date Gudzinas.

As he declared his sexual orientation, pictures of the duo came out right around the corner, mostly around September.

Later Carl too shared a picture of him with Erik in his own Instagram handle.

As the couple are striking poses in the net, the netizens stand as a witness on how happy the duo are. Though Carl was not ready to share news of his personal life, he felt it was necessary that he face the cameras and share his love life happenings with the world.

With his confession, he also highlighted that it was important to him that he came out honestly about his sexuality and thus he mentioned on camera that he is gay.

Not only that, but Carl also donated an amount of $100,000 to a non-government LGBTQ organization to prevent the kids from committing suicide.

Nassib’s contribution, his open declaration and his commitment with his boyfriend is an act of showing the world to be a better place for people who are not straight.

Carl Nassib and his boyfriend Erik Gudzinas will be sharing their first Thanksgiving together which will be a memorable one for sure. With the Vegas Raider’s match with the Dallas Cowboys, he will spend much of his holidays in the Stadium. But it might not sound too bad as his boyfriend would be watching his moves as he kicks some balls and strikes some goals in front of his fans. And not to forget his adorable boyfriend.

Who Is Carl Nassib?

While my article page shares happy news about the couple dating. Some of you who may not know Carl, might be wondering who he is. Well, as you scroll down, I hope you will find your answers to the question below.

Born on 12 April 1993, in West Chester, United States. The 29 years football player, plays for the Nation Football League or NFL. He is an outside linebacker for the Tampa Bay Buccaneers. He plays both as an offensive tackle and a defensive end.

In 2020, he signed a 3 years contract with the Las Vegas Raiders and recorded inception with a 37-12 win.

During the pride month, 21st June of 2021 he shared his sexual status on Instagram. He came out as the first NFL active player to confess that he is gay.

Let’s pray for the happy love life of these two adobe couples and who knows you might hear some wedding bells of these two love doves!

In this article:Carl Nassib, Who Is Carl Nassib’s Boyfriend?