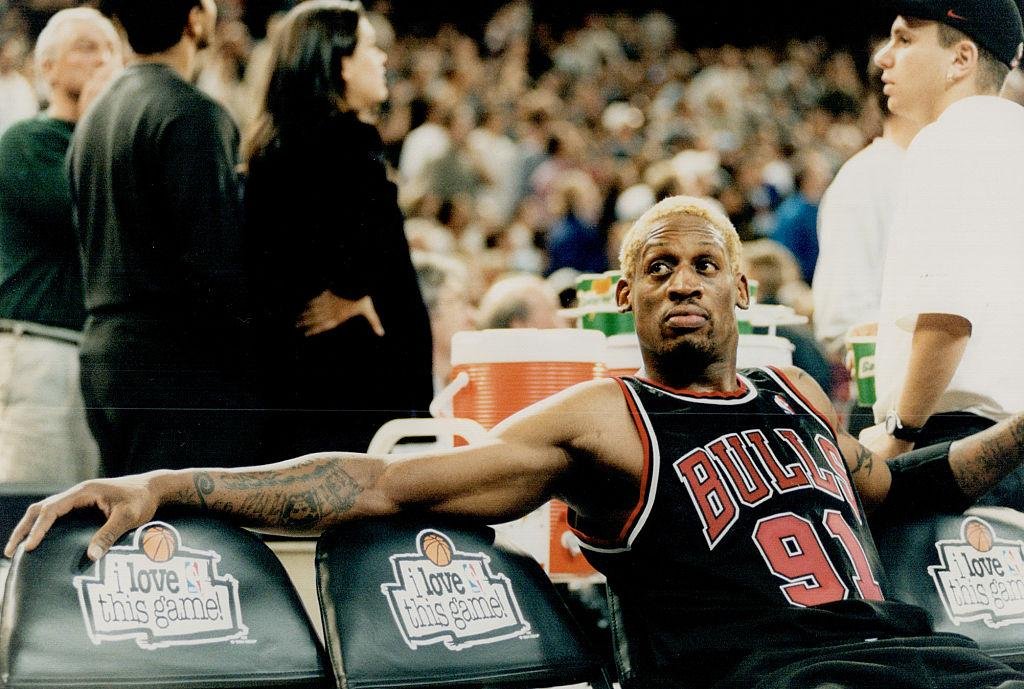 Dennis Rodman, or maybe you know him as the Worm for his fierce rebounding and defensive abilities as a professional basketball player. Dennis Rodman played in the NBA ( also known as National Basketball Association ) for teams like Chicago Bulls, Detroit Pistons, Los Angeles Lakers, and many more.

He is also famous for dyeing his hair in various colors and having numerous tattoos and piercings. Apart from being a professional basketball player, Dennis is also a former professional wrestler as well as an actor.

Dennis’ full name is Dennis Keith Rodman. He was born on the 13th of May in the year 1961. His place of birth is Trenton, New Jersey, United States. His father, Philander Rodman Jr., was an Air Force enlisted member. He even fought in the Vietnam War. His father later left his family and settled in the Philippines. Dennis had once stated that he has 47 siblings and that he is the oldest.

Rodman grew up in the Oak Cliff section of Dallas with his two sisters, Debra and Kim. He used to tag along with his sisters to play basketball. Debra is now All-Americans at Lousiana Tech and has won two National titles whereas Kim is All-Americans at Stephen F. Austin.

According to the latest data gathered and available, the net worth of the legendary Basketball player Dennis Rodman is estimated to be about $2 million. Dennis supposedly made a lot out of his career as an NBA player. He has played so many matches as well as written books and acted in movies. All of this has contributed to his wealth.

Dennis attended South Oak Cliff High School. After graduating, he went to North Central Texas College in Gainesville, Texas but had to drop out due to poor academic performance. He then transferred to Southeastern Oklahoma State University which is an NAIA school. There he played in NAIA basketball and won the season with the highest rank in the history of the school. This helped him earn an invitation to the Portsmouth Invitational Tournament where he was honored as the Most Valuable Player and this made him catch the eyes of the Detroit Pistons.

In 1987, Dennis Rodman started dating Annie Bakes and in 1988, the couple had a daughter, Alexis Caitlyn. They got married in 1992 but their relationship was filled with infidelities and accusations, and thus they got divorced after just 82 days of marriage.

In 1994, Dennis reportedly dated the famous singer, Madonna. There are many debates about the timeline of their relationship but all we know for sure is that they dated for only two months before going their separate ways. Their short stint was highly publicized.

In 1998, Dennis got married to the popular model Carmen Electra. Their nuptials were held at the Little Chapel of the Flowers which is situated in Las Vegas, Nevada. But after only 9 days, Dennis filed for the annulment of the marriage. However, they reconciled shortly after but Carmen Electra filed for a divorce in 1999.

In the same year, Dennis Rodman met Michelle Moyer and began dating. The couple had a son, Dennis Jr., in 2001 and a daughter, Trinity. The couple got married in 2003 but a year later Michelle filed for divorce. The couple tried to reconcile over a span of several years but to no result. Their marriage got finally dissolved in 2012.

Dennis Rodman is a record five-time NBA Championship winner. After becoming a power forward, he earned the honor of NBA All-Defensive First Team a record seven times. On top of this, he twice won the title of NBA Defensive Player of the Year Award. Dennis Rodman was installed into the Naismith Memorial Basketball Hall of Fame in the year 2011.