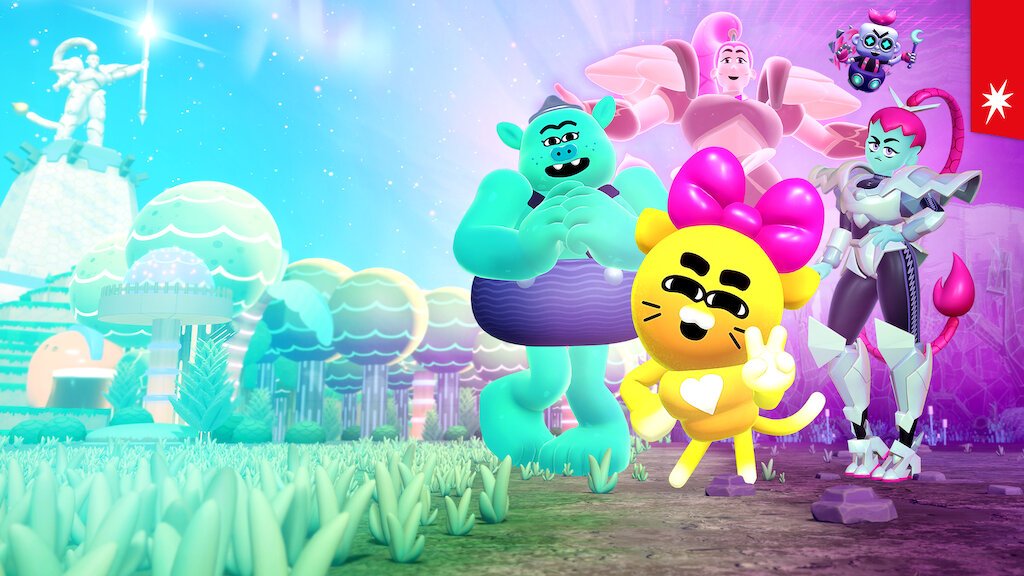 Battle Kitty is an animated interactive adventure television series that is created by Matt Layzell. An interactive TV show or movie is a fun way to watch content, especially aimed at children, wherein the viewers are able to choose characters of their liking and can shape the story according to their preferences and choices. An interactive show encourages children to express their stories and choices while also helping them explore their creativity. Season one of Battle Kitty will premiere on Netflix on 19 April 2022 and will consist of 9 episodes. The premiere of Battle Kitty comes two years after it was initially announced that Netflix would be producing the show. The series is based on Layzell’s 2019 Instagram series titled “The Adventures of Kitty and Orc” and the show is described by Layzell as a “distinctive interactive story experience”. The nine-episode animated series is written by Matt Layzell, Dave Tennant, and Shakira Pressley. The show is produced by Matt Layzell and Melissa Cobb. Layzell also acts as a first-time showrunner. Tessa Rose serves as an assistant producer. The show is produced by Choice Provisions, Laughing Wild, Netflix Animation, and Higher Ground Productions. The animation for Battle Kitty is done by the Pivotal Post editing company. The show is distributed by and broadcast on Netflix.

Prior to working on Battle Kitty, Matt Layzell worked as an animator for Cartoon Network’s animated show called The Amazing World of Gumball. Layzell has also worked as a supervising director for a Nickelodeon series called Sanjay and Craig. He has also worked as a supervisor on other shows such as Apple and Onion which is produced by Cartoon Network and Pinky Malinky, produced by Netflix. Describing the message behind the show, Layzell says that Kitty is an underdog but has big dreams and a lot of determination.

He wants the kids who watch the show, to realize that despite their fears, they can accomplish great things in life. Melissa Cobb, who is the vice president of the kids and family department at Netflix, has stated that Battle Kitty will push the traditional boundaries of storytelling and will showcase an innovative and interactive way of telling stories. The show takes inspiration and elements from various video games from multiple genres and is described as one of the most ambitious interactive projects ever created. The show will allow the kids to have their own adventures within Kitty’s universe at the touch of a button. They will be able to control what Kitty does and how the story progresses in each episode.

Season one of Battle Kitty is set to premiere on the Netflix streaming platform on 19 April in the year 2022. The release date of season two of Battle Kitty is not known yet since the show has not been renewed for a second season.

Battle Kitty is not officially announced or canceled by Netflix. This is probably because Netflix takes a little bit of time before it renews any kind of show. Netflix takes time and recognizes whether the show is getting popularity or a fan base or not. If a show successfully creates a fan base, Netflix thinks of renewing the show.

But the wait is now over as Netflix has officially announced that season 2 is in working. The first season was released on April 19, 2022, which means Netflix took at least 3 to 4 months to recognize the fan base of the show. The show is based on a comic book so there is plenty of plot material to cover. Netflix did not have a problem with the storyline but it just wanted to check whether it creates a fan base or not as the show has already created a fan base, Netflix has renewed the show for another go and it may release anytime soon.

Battle Kitty is set in a futuristic yet medieval world, where the warriors have to find and defeat the monsters on Battle Island and also collect precious keys in order to become the “Champion”. Kitty and Orc are best friends who are on a mission to help Kitty become a Champion. The duo begins their journey of becoming Champions, where they face many obstacles but eventually find a surprise for them at the Ancient Ruins.

The interactive game-style format of the show will allow the kids to choose what happens next in Kitty’s journey and will allow them to have their own adventures, unlock new stories and discover some fun surprises along the way.

The main protagonist of Battle Kitty is Kitty, an animated cat with a pink bow, that looks adorable but possesses super-strength and has a great arsenal of tools to fight and defeat monsters. Kitty is an underdog and not thought to be brave enough to become Champion. However, she proves that despite what others think, you can achieve great things with strength and determination. Another main character of the show is Orc, Kitty’s best friend, who helps her on her quest to defeat all monsters on Battle Island and earn the title of “Champion”.

The trailer for season 2 of Battle Kitty is not yet available since the show has not been renewed for a second season.

Where to Watch Battle Kitty Season 2?

Season one of Battle Kitty can be viewed online on Netflix.