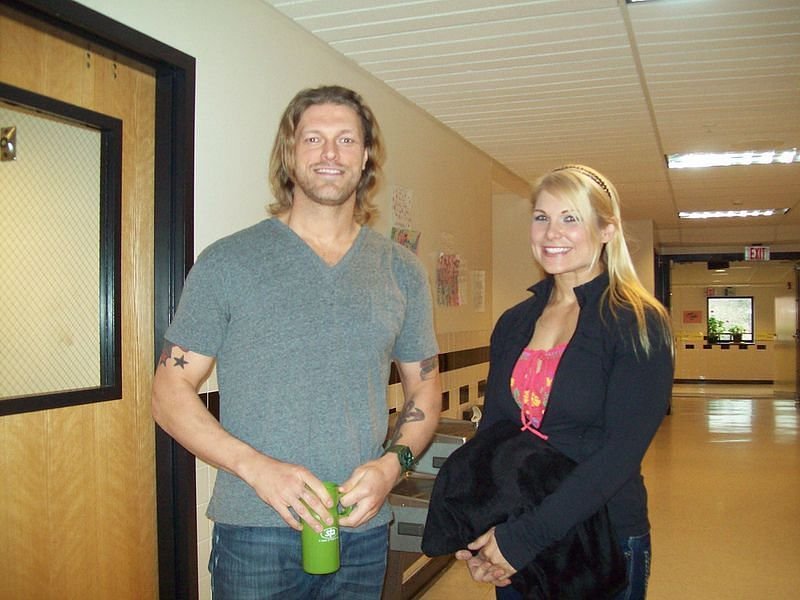 Edge, the WWE professional wrestler is of Canadian origin. He performs on the Raw brand. The professional wrestler has won the second most championships in WWE history with a total of 31 wins. He holds the record for World Heavyweight Championship with 7 wins. He has been titled as WWE’s (formerly known as WWF) 14th Triple Crown Champion and 7th Grand Slam Champion. He won the King of the Ring Tournament, Money in the Bank ladder match (he was the first winner ), and 2010 Royal Rumble. This made him the first wrestler in history to win all of the three accolades.

Though he is famous as Edge in the ring, for his friends and family he is Adam Joseph Copeland. He was born on the 30th of October 1973 in the countryside town of Orangeville, Ontario. He was raised single-handedly by his mother Judy Lean Copeland.

Looking at wrestlers like Mr. Perfect, Randy Savage, Hulk Hogan, Ricky Steamboat, Shawn Michaels, and Bret Hart he became interested in professional wrestling at a young age. But due to his financial condition, he had to put aside his wrestling aspiration and do several jobs and attend Humber College where he studied Radio Broadcasting.

In 1998, The wrestler began a relationship with Alannah Morley and they got married after a few years in 2001. However, they got divorced soon in 2004.

He got married for the second time in 2004 to Lisa Ortiz. But soon started an affair with fellow wrestler Amy “Lita” Dumas, who was Copeland’s friend’s girlfriend. Their relationship became a public affair in 2005 and resulted in Copeland’s divorce from Lisa Ortiz in the same year.

In 2013, Copeland had a daughter with former WWE wrestler Beth Phoenix. They named her Lyric Rose Copeland. Three years later in 2016 they had their second daughter and named her Ruby Ever Copeland. Copeland got married for the third time to Beth Phoenix in 2016, on his 43rd birthday.

Edge has revealed the moment which inspired him to become a wrestler as when he attended WrestleMania VI at the Toronto SkyDome at the age of 16 in 1990. A year later, in 1991, he won an essay contest at his local gym. And with that, he earned a free wrestling training with Sweet Daddy Siki and Ron Hutchison in Toronto.

Copeland made his debut as a professional wrestler in 1992 at an event in Monarch Park Stadium and continued to wrestle in various independent promotions and competed in singles and tag team competitions with childhood friend Christian Cage. In 1997, he signed a developmental deal with WWF (now WWE) and debuted as Edge in 1998. After winning his first WWF Championship, he formed a tag team with Christian and they won the World Tag Team Championship seven times.

After they split up in 2001, Edge made his successful solo career. He won the second most championships in WWE history with a total of 31 wins. In 2011, he retired due to several serious neck injuries and got inducted into the WWE Hall of Fame. However, he returned in the 2020 Royal Rumble match and won the 2021 Royal Rumble match. He became the eighth man in history to win this match twice and the third to win it as the first entrant as well as the first to win after being instated into the WWE Hall of Fame.

He is reckoned as one of the greatest professional wrestlers of all time.

Apart from being a great wrestler, Copeland is also an actor. He has made a cameo appearance in the fantasy movie Highlander: Endgame. And has also starred in WWE Studio’s Bending the Rules. He even made guest appearances in a quiz show titled Weakest Link, The Flash, MADtv, Mind of Mencia, and Deal or No Deal. He played recurring roles in the SyFy series Haven and the fifth and sixth seasons of Vikings.

READ MORE | Rufus Sewell Wife And Everything We Know