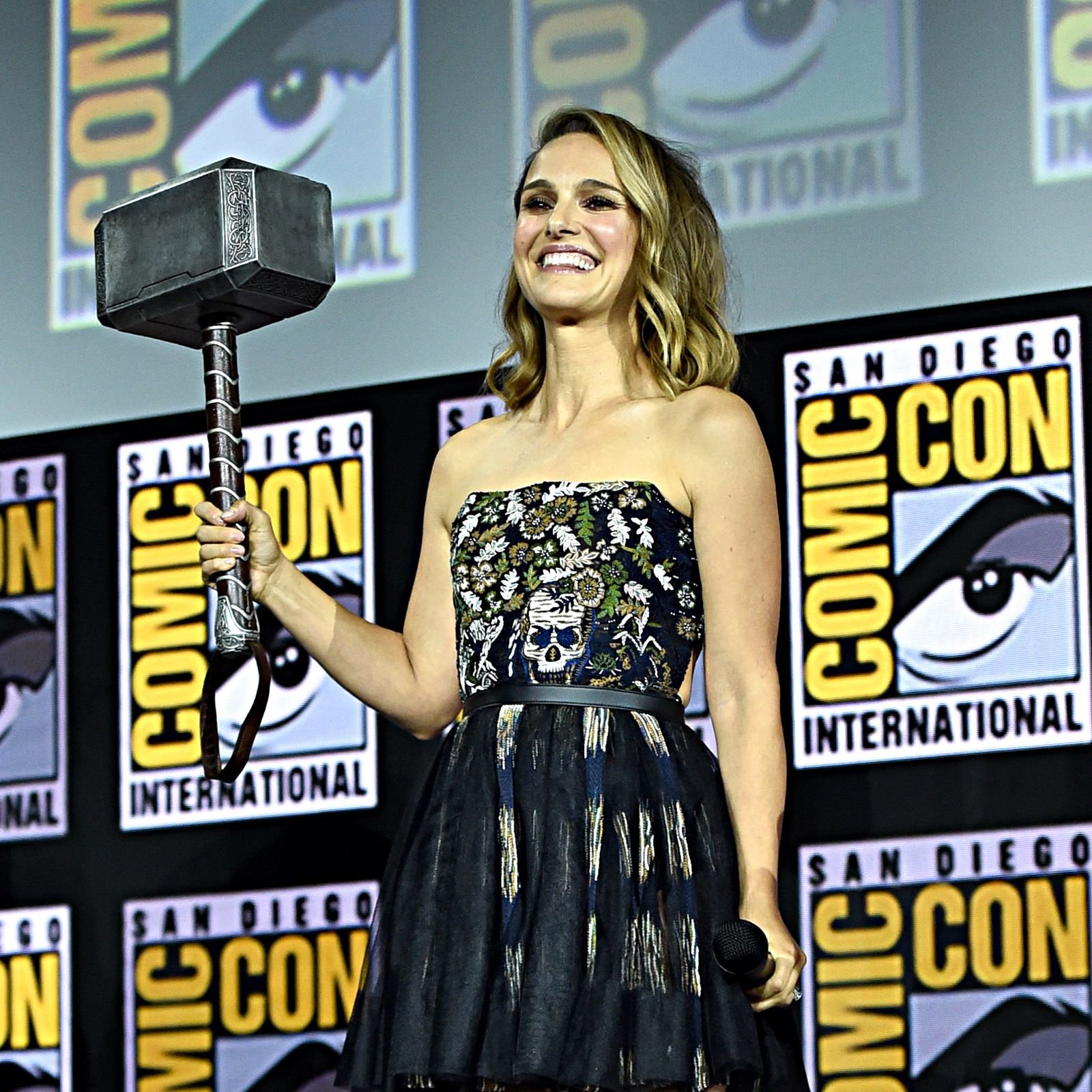 Who is Lady Thor?

Jane Foster is a superhero that appears in the American comic books that are published by Marvel Comics. The character of Jane Foster is initially introduced as a love interest of the Avenger superhero named Thor Odinson until she becomes a superhero in her own right and thus given the name Lady Thor. The character of Jane Foster is created by comic book writers Stan Lee and Larry Lieber, with illustrations provided by artist Jack Kirby. Jane Foster first appeared in Journey into Mystery #84, which was published in September in the year 1962. During the initial years of her appearance, Jane Foster was a nurse, that was employed by Dr. Donald Blake (who was Thor’s first human host), before she eventually decided to become a doctor herself. Later on, Jane Foster is revealed to be worthy of wielding Thor’s hammer named Mjolnir, when Thor himself is no longer able to. During this time, Jane Foster assumes the position of Thor and joins the group of superheroes known as the Avengers. Jane Foster’s time as Lady Thor ends, when she sacrifices her life and the mantle reverts back to original Thor. After Brunnhilde and the entire Valkyrior are killed during “The War of the Realms”, Jane Foster takes up the position of Valkyrie.

Who is Lady Thor?

When Marvel released the new teaser trailer for Thor: Love and Thunder, we saw Jane Foster, portrayed by Natalie Portman, wielding Thor’s hammer named Mjolnir, as Thor (portrayed by Chris Hemsworth), watches his hammer fly to Jane. The question is who exactly is Lady Thor in the Marvel Comics and what can we expect from her in the MCU movies. In the comics, Thor has to face his nemesis, Gorr the God Butcher, whilst Jane receives a cancer diagnosis. Thor attempted to heal her using Asgardian medical treatments which Jane refused. However, one small bit of magic changed her course of treatment, that is, when Thor was deemed unworthy of wielding Mjolnir, the hammer called out to Jane, who eventually wielded and took up the mantle of Lady Thor/ Mighty Thor/ Thor. However, Thor Odinson did not know it was Jane who wielded his hammer. After a lot of arguments between the two heroes, Thor finally gives Lady Thor his blessing to wield Mjolnir, still unaware that it was Jane Foster. Unfortunately, due to Jane’s diagnosis, her time as Thor was limited, as each time she transformed into Lady Thor, the effects of chemotherapy disappeared from her body thus making her sick again. In the end, she sacrifices her life to save the Asgardians. Marvel Studios has not revealed how closely they plan to follow the comic book storyline. Hence we will have to wait and see till the movie releases on 8 July 2022.

Is Lady Thor Stronger Than Thor?

Natalie Portman’s Jane Foster takes up the mantle of Lady Thor/ Thor in the upcoming Marvel film Thor: Love and Thunder. Jane Foster’s version of Thor may be just as strong as the original Thor, however, she will have a different power and skill set. She will also have abilities that will be different from Thor’s which might make her a better fit for the role. Wielding Mjolnir will make Jane Foster one of the most powerful superheroes. Jane’s Thor can be easily dismissed as the weaker version since Thor already possesses superhuman strength even without Mjolnir and also for the fact that Jane is still a human. However, Lady Thor will come with different powers that will help her meet the expectations that come with the title of Lady Thor. Lady Thor will also be provided with deeper motivations, meaningful backstory and complex personality traits, rather than just being represented as Thor’s love interest. She will find herself standing shoulder to shoulder beside the original Thor as an equal, not only in terms of power but also in character.

Mjlonir is an enchanted hammer that was forged by Eitri and the Dwarves of Nidavellir for Odin’s Asgardian family. The hammer is forged by the Asgardian metal Uru and is Thor’s weapon of choice until it was destroyed by Hela in 2017 in the MCU movie Thor: Ragnarok. Only the person deemed worthy, is able to wield Mjolnir. The enchantments placed upon by Odin have made the hammer indestructible. It can survive heat as powerful as the heat of the sun as well as survived blasts that are powerful enough to destroy entire planets. Mjolnir can manipulate the elements of wind, thunder, rain and lightning, and can be used at the discretion of its wielder. Mjolnir can also open portals to other worlds, such as Asgard. Mjolnir allows its wielder to fly through the air at great speeds and it has been stated that Mjolnir’s speed transcends time and space, The hammer can project powerful beams of energy and can help its wielder channel the greater energy required for strong attacks. Mjolnir can also detects all types of energy such as the energy of an Asgardian in hiding, or evil and supernatural energy. Mjolnir can also absorb any energy blasts that are directed towards it as a means of attack.

Throughout the MCU, Thor wields different weapons, the two most notable being Mjolnir and Stormbreaker. Though Mjolnir and Stormbreaker have similar properties, there are few differences. Due to the enchantment spell bestowed on Mjolnir by Odin, only those who are deemed worthy can wield Mjolnir regardless of physical strength. Whereas there is no such spell surrounding Stormbreaker, and anyone with great physical strength can wield it. Even though they may not be able to wield thunder and lightning like Thor does, they can still use Stormbreaker as a strong axe. Mjolnir though deemed indestructible was easily destroyed by Hela in Thor: Ragnarok and from the looks of it, Stormbreaker is not that easily destructible as we see in Avengers: Endgame, when Thor easily impales Thanos in the chest using the Stormbreaker. One similarity between Mjolnir and Stormbreaker is that, they both enhance Thor’s abilities and allow him to summon lightning and change the weather. Both weapons allow Thor to fly at incredible speed and can be summoned with his hand.

In 2014, Marvel fans all around the world were shocked when it was announced that a female Thor would be introduced in the God of Thunder’s comic book series. It was eventually revealed that Lady Thor is none other Jane Foster, who was first introduced as a female nurse and Thor’s love interest in the 1962 comics. Once Thor is deemed unworthy to wield Mjolnir, the mantle is taken up by Jane Foster, who has just received a breast cancer diagnosis and is undergoing chemotherapy, but does not have long to live. Every time she transforms into Thor, the effects of chemotherapy wear off thereby making her sick again, so she retires the title of Lady Thor until Asgard is attacked by Mangog, a beast created from the hatred of a billion souls. Mangog knocks Asgard out of orbit and sends it plummeting towards the sun. In an attempt to save Asgard one last time, wields Mjolnir, restrains Mangog to it and then flings the hammer towards the sun, dragging Mangog with it. With Mjolnir and Mangog destroyed, she returns to her human form and succumbs to her death.

Will Lady Thor Be in Avengers?

In the comics, when Thor Odinson is deemed unworthy to wield Mjolnir, Jane Foster assumes the role of Lady Thor, and eventually takes his place in The Avengers. This partnership is, however, short-lived. Jane Foster receives a breast cancer diagnosis and in a final attempt to save Asgard from the evil beast Mangog, she transforms into Lady Thor (which wears off the effects of chemotherapy) one last time, and destroys Mangog. She then reverts back to a human being and eventually succumbs to her death.

Thor is not gay in the comic book version. However, fans think the MCU Thor might be gay after the release of the trailer of Thor: Love and Thunder. In the scene portrayed in the trailer, Peter Quill speaks about looking into the eyes of people you love, to which Thor seemingly looks at Peter. It is not sure whether the Marvel movies will explore that avenue.

Is Thor: Love and Thunder based upon LGBTQ?

Thor: Love and Thunder are not based upon LGBTQ. There isn’t much representation of LGBTQ characters or superheroes in the Marvel Cinematic Universe (MCU) films. However, Marvel has hinted that some characters might have a LGBTQ history such as Valkyrie (portrayed by Tessa Thompson), Jane Foster in the comics (portrayed by Natalie Portman in the movies) and Loki (portrayed by Tom Hiddleston).

Thor: Love and Thunder is set to release on 8 July 2022 in the United States of America (USA) and is part of the Phase Four of the Marvel Cinematic Universe (MCU).

In this article:lady thor, Who is Lady Thor?