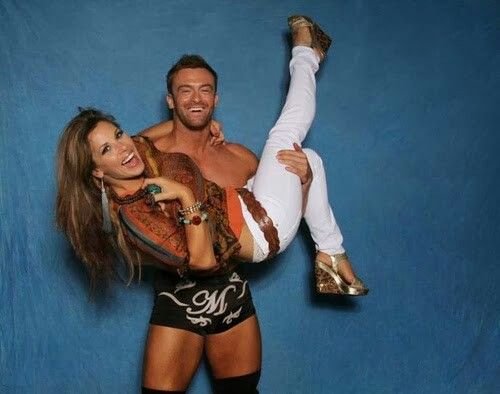 Wondering, who is Mickie James Husband? Mickie James, The professional wrestler and Impact Knockout Champion is of American origin. She is currently performing for National Wrestling Alliance (also known as NWA ) and Impact Wrestling. She is widely famous for her performance in WWE. She is one of the only five other women who have held six or more WWE Women Championships. She is also a three-time TNA Knockouts Champion. Apart from being a wrestler, she is also a country singer.

Here’s what we know about Mickie James Husband.

Although known as Princess Alexis and Vicki Adams inside the ring, her real name is Mickie Laree James. She was born on the 31st of August in 1979. Her hometown is Richmond, Virginia, USA. She is part Native American, belonging to the Powhatan tribe. Her father was a VAIL League Division 3 Championship coach while her mother was a real estate agent and also a teacher.

She has a sister, a half-sister, a half-brother, and three stepbrothers as her parents got divorced when she was young. She attended Patrick Henry High School and graduated in 1997. She further studied for an Associate of Arts degree in Business Administration and also received her Bachelor of Arts degree in Operation Management.

However, in 2014 Mickie James and Nick Aldis, who is also known as Magnus, had their child. They named him Donovan Patrick Aldis. Mickie and Nick got engaged in late 2014 and finally got married in 2015.

Mickie James attended a professional wrestling school in Washington, D.C. as she was interested in professional wrestling from a young age. She made her debut in 1999 as a Valet for KYDA Pro Wrestling on the Independent Circuit. She managed to win KYDA Pro Heavyweight Championship by beating several of her male counterparts. She attended many training camps in order to improve her wrestling abilities. She even competed for Mayland Championship Wrestling (MCW). She was signed by World Wrestling Entertainment (WWE, then WWF) in 2003.

Mickie played her first singles match in 2003. And very soon she became the first and the only (thus far ) woman to compete in a Clockwork Orange House of Fun Match.

In 2003, Mickie signed a developmental contract with World Wrestling Entertainment (WWE ) and was sent to Ohio Valley Wrestling which was their then- developmental valley, to train further. There she competed in several tag team matches and even won a Halloween Costume Contest.

Mickie James made her WWE main roster debut in 2005 and made it into the storyline with Trish Stratus. In this Mickie’s gimmick was that she was Stratus’ biggest fan who slowly turns into an obsessed stalker. This angle ran for over eight months.

She is now Impact Wrestling and has won her fourth Knockouts Championship. This has made her a total of ten times Women’s World Champion.

Mickie released her first country music album in 2010 titled Strangers and Angles. She then released a single titled “Hardcore Country” from her album Somebody’s Gonna Pay. She even released a music video for the single “Somebody’s Gonna Pay”. She also released her music videos for the singles “Left Right Left” and “I Don’t Give A”. She was under the Entertainment One Label from 2010 to 2013. After a gap of three years, in 2016 she signed under Sony Label. Her latest single was released in 2021 that was titled “Grown Ass Woman”.